The Effra and Lambeth Marsh

The Effra River originally ran into Lambeth Marsh, which lay to the north-east of what is now Camberwell New Road, before it was diverted in the 1200s to enter the Thames near what is now Vauxhall Bridge.

This 1746 map, taken from Graham Gibbers' On Lambeth Marsh, shows the Effra as a thin black line running up just west of Cold Harbour and then north-west through South Lambeth to the Thames. However, it is now clear that the river originally ran north of Camberwell into the extensive marshlands which then lay south of the Thames, possibly joining one of the rivers shown as rather thicker black lines in this map. 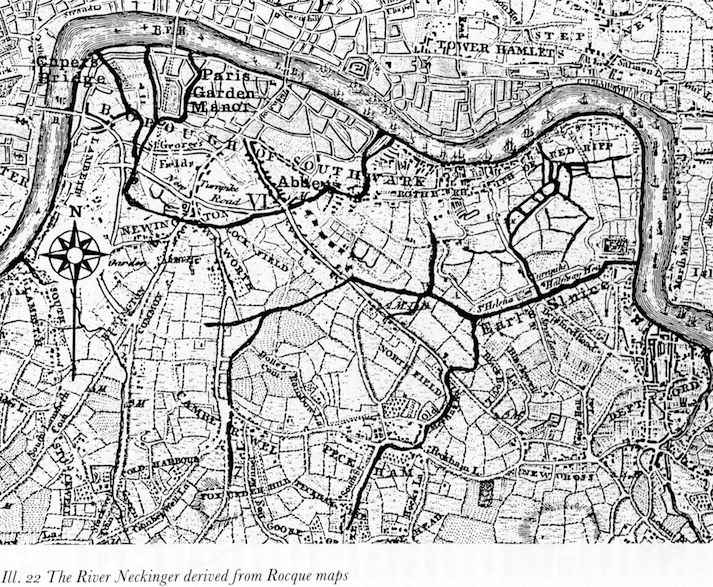 Jon Newman includes this map in his 2016 book River Effra: South London's Secret Spine. He thinks it probable that the Effra ran up to what is now the Oval and then into Earl's Sluice. But I wonder whether the pre-historic Effra might not have fallen away into the more southerly part of Lambeth Marsh. I explore this option below, but I guess we will never know for sure. 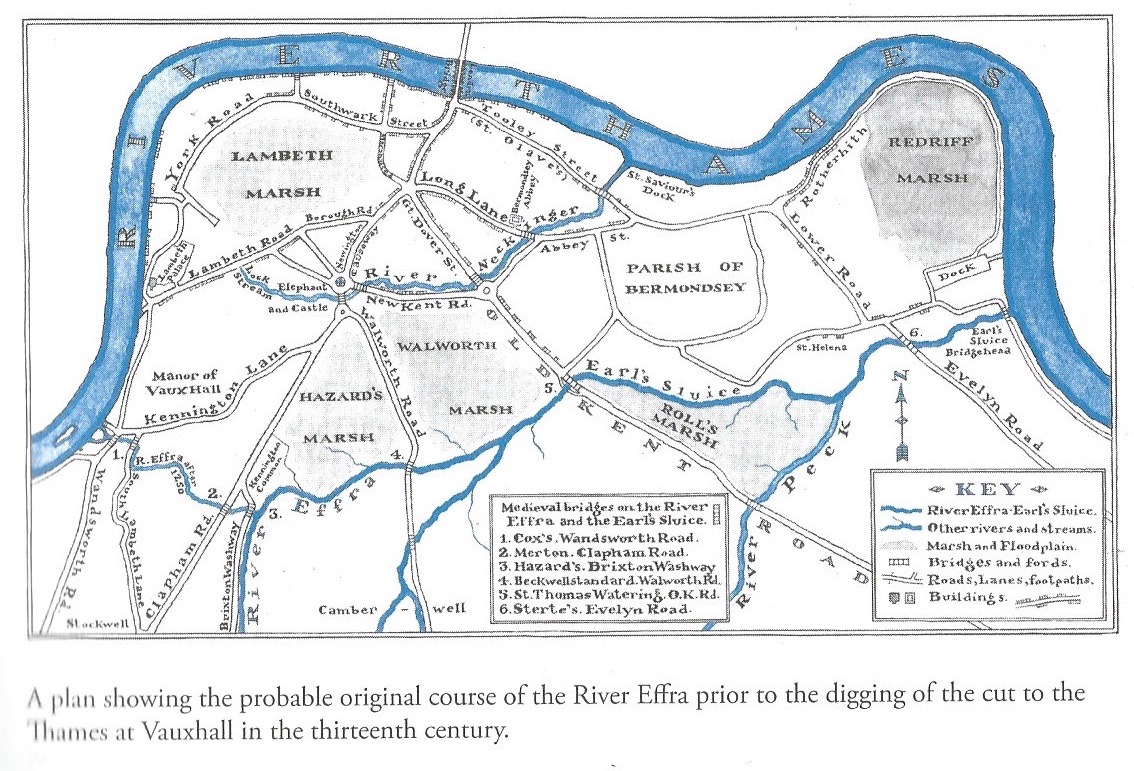 The first person to realise that the Effra did not originally run through South Lambeth and Vauxhall was Graham Dawson of the Southwark & Lambeth Archaeological Society who was researching very old legal archives. These revealed that the Effra used to continue northeast and then east through Walworth and then through the grounds of Bermondsey Priory. In the mid-13th century, to end flooding problems, the monks agreed with nearby landowners, to divert the flow. The priory built a bridge and dug a new ditch to connect with existing channels on the boundaries of Kennington, Vauxhall and Battersea.  As a result of this diversion, and no doubt others, Walworth Marsh eventually dried out to become Walworth Common. Graham's research is here.

The Cluniac Priory and later Abbey of St Saviour Bermondsey is shown as the Abbey in Southwark in the above map, and also in the foreground of the picture below. Its site is now Bermondsey Square, just off Tower Bridge Road. 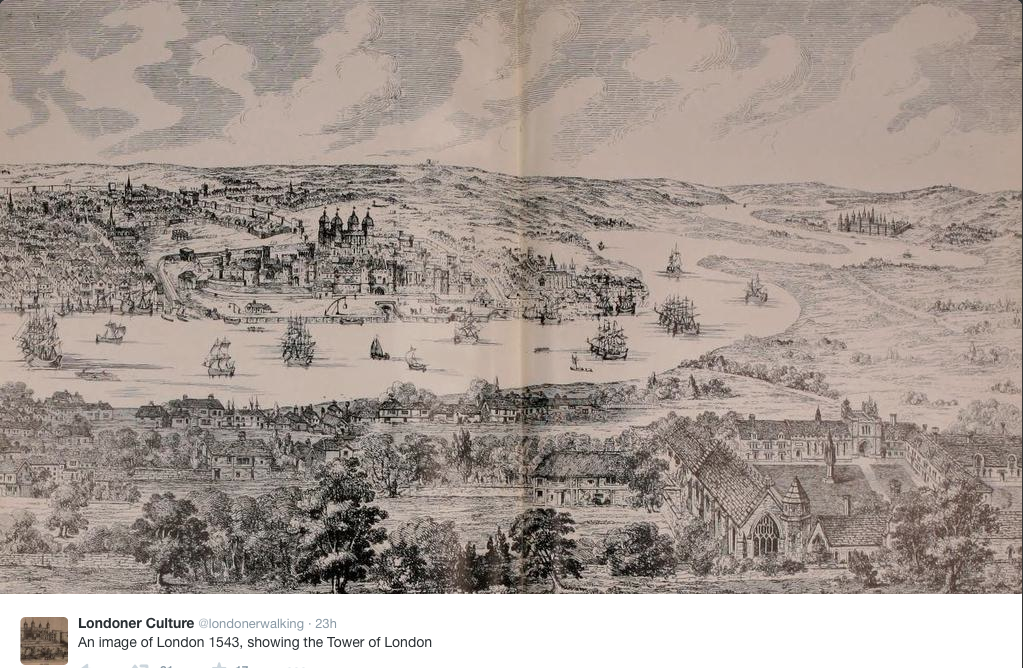 Second, even without this legal confirmation, it is possible to use local topography to identify the likely original course of the Effra - beginning by standing near the Oval Tube Station at the junction of Prima Road (previously Church Row) with Brixton Road. Old maps and documents, such as the one above, show that the Effra turned left here to run along, or very close to, Church Row and then on to the south-west of the Oval Cricket Ground. But the ground around Prima Road falls sharply to the north, rapidly losing 1-2 metres in the descent to Kennington Common/Park. Any unconstrained river would surely have flowed straight on down this slope. It is therefore clear that the Effra was, here at least, diverted west and away from Kennington.

This 1871 Ordnance Survey map shows the elevation (in feet) of various points around Church Row, and it can be seen that this road is 3' higher than nearby Camberwell New Road (the main road running south-east on this map) and 8' higher than a point further to the east. It is also 2' higher than a point on Brixton Road just to the south, reinforcing the suggestion that the river cannot have originally flowed up to and along Church Row. Instead, the spot heights along Cranmer Road show a steady slope down to the east, and similar slopes are to be found running north-east from further south on the Brixton Road. 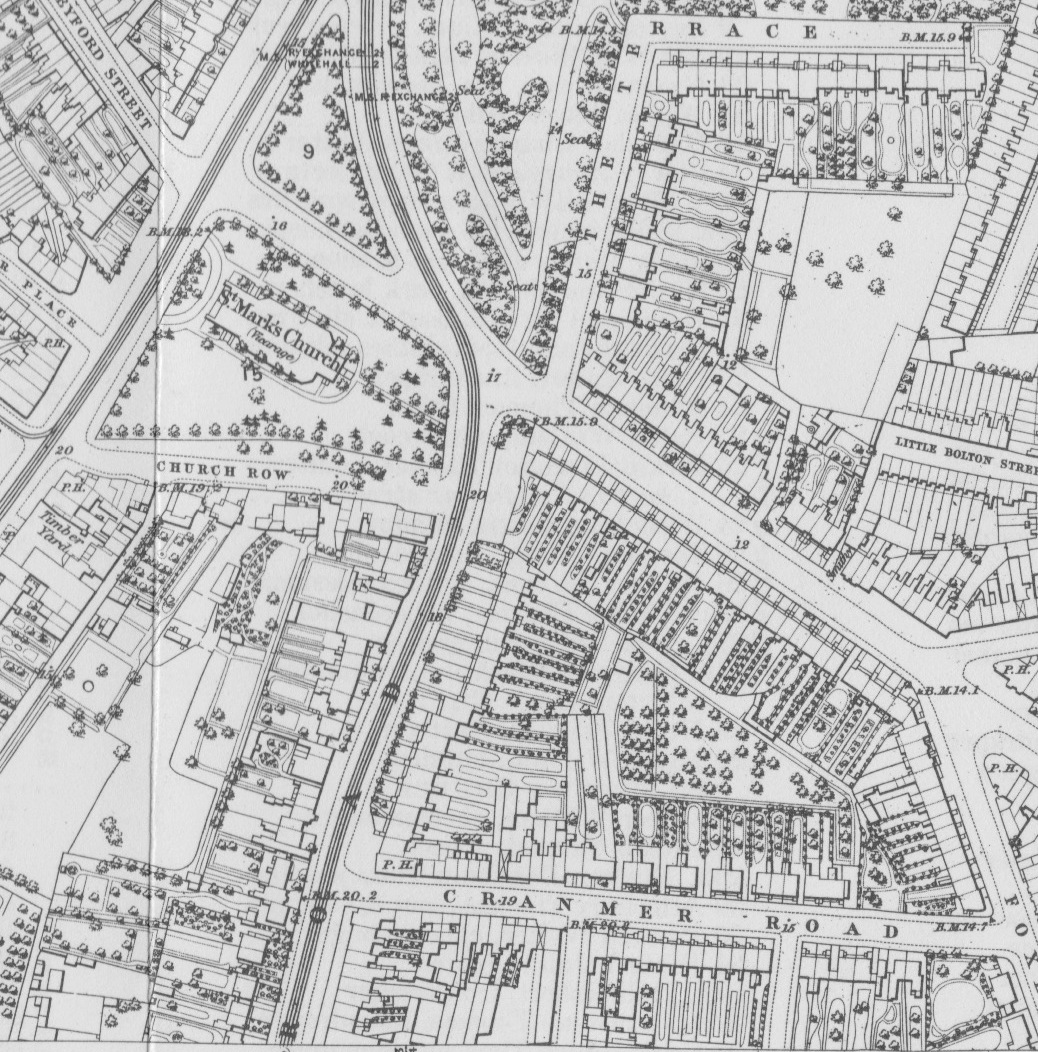 The third piece of evidence is the strange height profile of the diverted river, as noted by geographer Martin Knight in this interesting article in which he notes that the diverted river 'has a very short flat flood plain section close to its mouth relative to its overall length'. The pre-diversion profile, including a long stretch across Lambeth Marsh (see further below) would have been much more normal.

So if the river did not continue up to the Oval, where did it originally flow? In order to understand the various possible routes, I have highlighted the elevations shown (in feet) on this 1871 Ordnance Survey map. 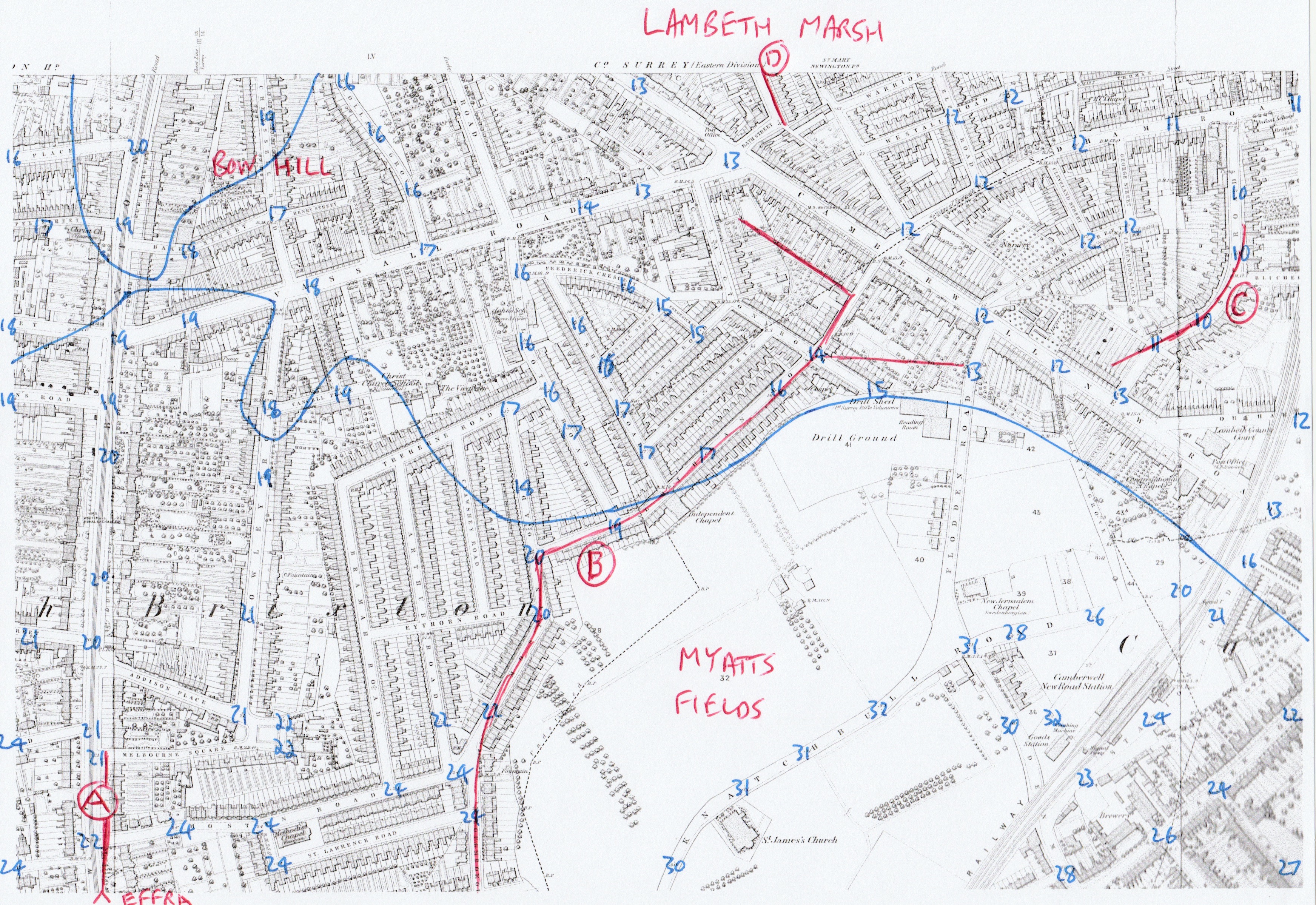 It seems pretty clear that the Effra ran down a valley as far north as point A. Note the higher ground to either side of the road.

There is then an increasingly obvious slope down to the north-east of the Brixton Road. (I have drawn a contour line between the 18 and 19 foot elevations.) Vassall Road itself drops as much as 6 feet (2 metres) from west to east. Lambeth Marsh was then north and east of Vassall Road, so it seems most likely that the Effra originally ran down this slope and into the marsh. As the marsh (and Walworth Marsh to the north of it) was an extended flood plain, the streams that drained it will have meandered and frequently changed course before eventually being channeled, divided, ditched or blocked, which is probably what happened to the Effra around or south of Vassall Road.

One of the more prominent marshland streams, Earl's Sluice, may have run at one time along the shallow valley at point C on its way to the Thames at Deptford. And a river at point D may well have connected with another marshland stream, the Neckinger, at Newington Butts. Indeed, it is interesting that, even as late as 1830, Greenwood's Map shows streams at points B and D, running into the marsh. Here is an extract from Greenwood's map, with Vassall Road to the north and Knatchbull Road to the south. 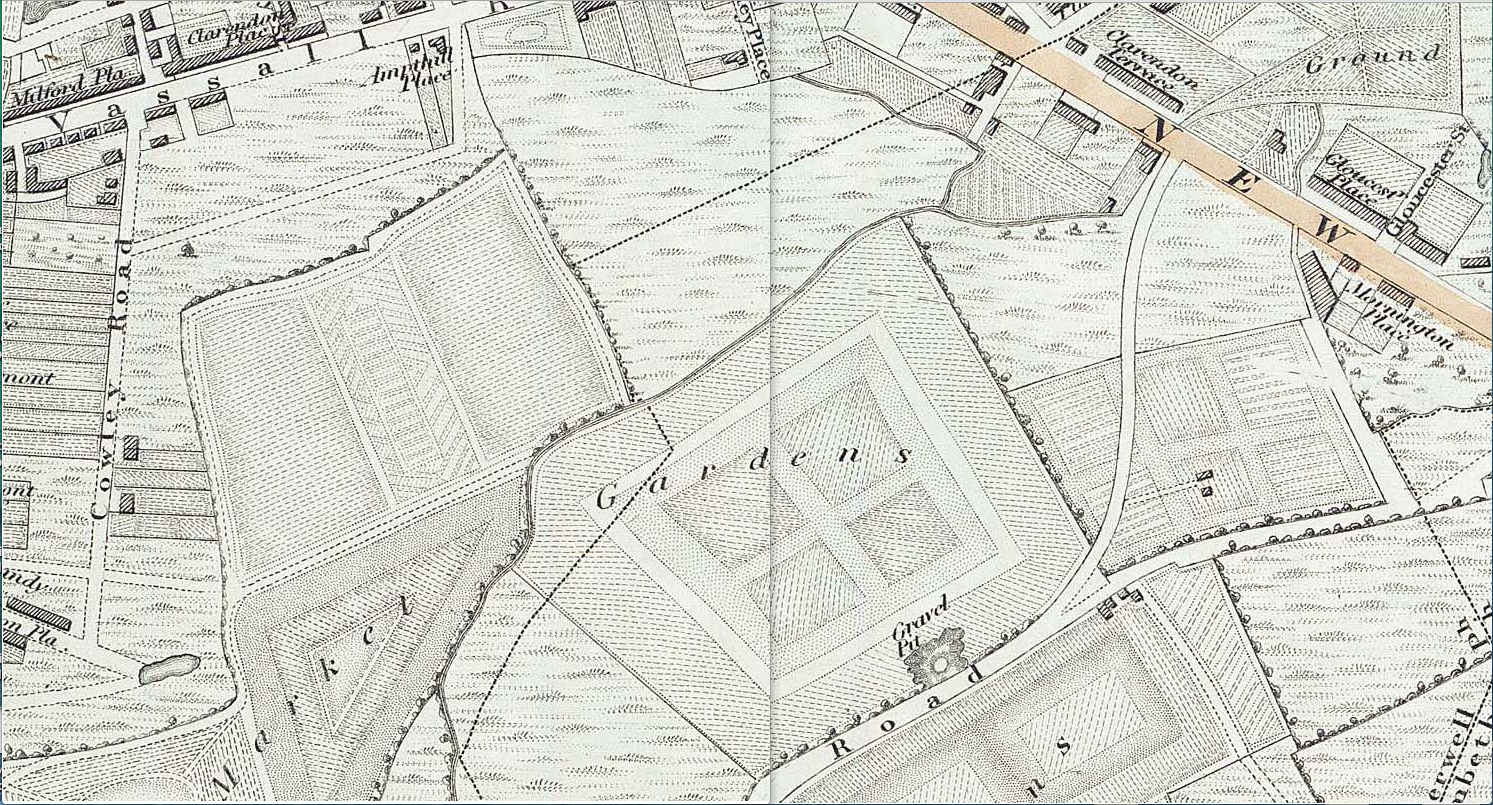