This is a brief history of the Oval Cricket Ground, which once hosted the first FA Cup Final and the original Ashes test match. (The story of the Ashes is at the end of this article.)

The photo above was taken in 2003, looking towards Harleyford Road and the Vauxhall End of the cricket ground. The ground has come a long way since cricket was first played here in 1846. 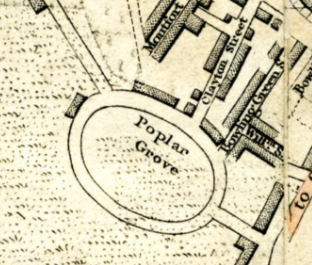 The memorable oval shape of the ground dates back to c1790 when an oval road was first laid around what was originally a cabbage garden and then a market garden. An 1818 map shows it as 'Poplar Grove' but it had become 'The Oval' by 1830. After a number of proposed building projects had failed, the Oval was opened as a cricket ground in 1846 following the expulsion of the Montpelier Club from their ground in nearby Walworth. Turfs were brought down from Tooting Common.

The Oval hosted an endurance walking event in 1851 in which Richard Manks covered 1,000 miles in 500 hours, walking round the Oval's outfield. To help him at night, lamps were hung around the ground - making this arguably the world's first floodlit sporting event.

Here is a painting c.1850 showing the old market garden buildings in use as the pavilion etc.  Click on the image to see a larger version.

The photo below left (taken around 1870) shows part of the then Phoenix gas works to the right of the ground. 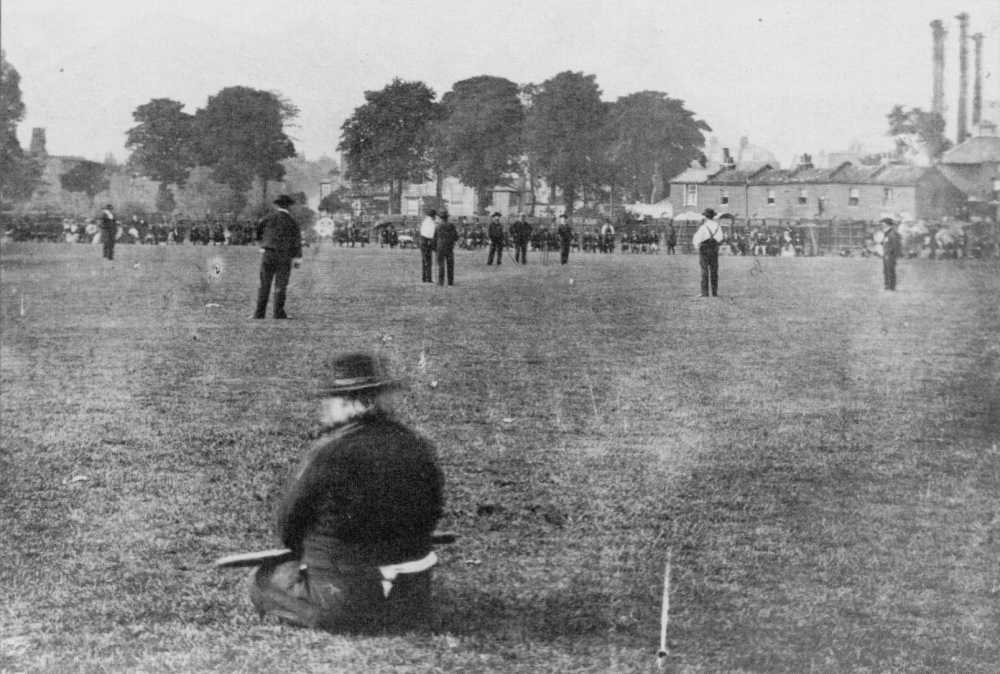 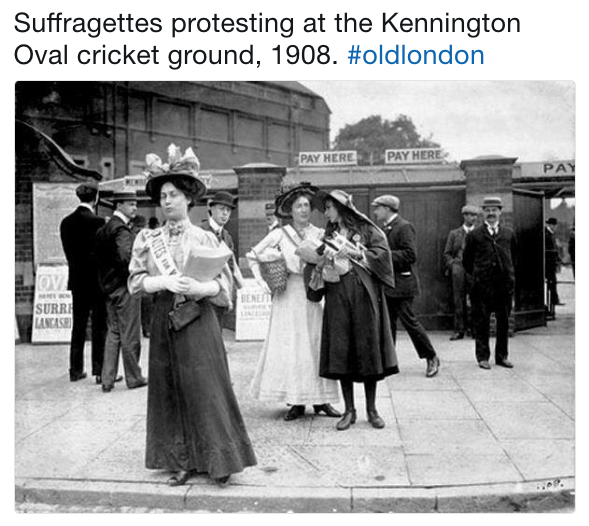 In 1880 the Oval hosted the first 'Test Match' to be held in England since the series began in Melbourne in 1877.  WG Grace, scored the first ever century for the home side. He was also joined in the team by his two brothers, Fred and EM, the first and last time three brothers have represented England.

A disastrous performance by England at the same ground, two years later, led to a mock obituary and "the Ashes":- see further detail below.

The first Test match not to involve England and Australia took place in 1888 when South Africa played England. 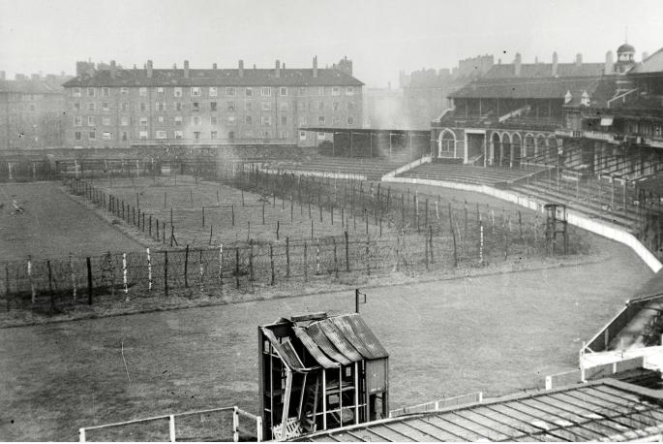 In its early days the Oval also hosted other sports. For instance, it was also the place where the first FA Cup Final was played in 1872 - in front of a 2000 strong crowd. And it hosted the first England v Scotland and England v Wales rugby union matches.

The large crowds who visited the Oval meant that it was a good place for the Suffragettes to demonstrate.

The ground was set up as - but never used as - a Prison of War Camp during the Second World War. (Photo on left)

And a German airman landed near the Oval in 1940:- see separate story. 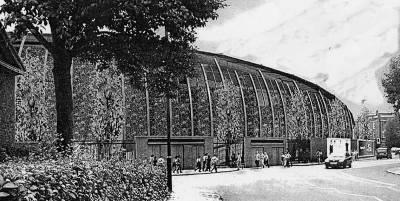 The Oval became the subject of some controversy in 2002/2003 when Lambeth Council approved plans by the Surrey County Cricket Club to develop the Harleyford Road side of the ground, despite fierce opposition from some local residents. The Club wanted to build a 26.5 metre stand - pictured left - and residents said that this would be out of scale with its surroundings, would create a canyon effect along a busy trunk road, and remove sunlight from a great number of local residents' homes.

Radio and TV commentators often mention the old gasometers that loom over one side of the ground.

The August 1882 Oval "Test" was very exciting, with the Australians all out for only 63 runs in their first innings. But their ace bowler Fred Spofforth ensured an English collapse when he took 14 English wickets for only 90 runs. Their equally ace wicketkeeper, Jack Blackham, kept the ball as a souvenir and it is now on show at the Melbourne Cricket Ground:- see photo on right.

The media were just as cruel then as they are now and the satirical magazine "Punch" asked whether the English team had "want of devil, coolness, nerve and backbone". And "The Sporting Times" carried this mock obituary for English cricket, "In Affectionate Remembrance of ENGLISH CRICKET, which died at the Oval on 29th August 1882, Deeply lamented by a large circle of sorrowing friends and acquaintances.  R.I.P.  N.B. - The body will be cremated and the ashes taken to Australia.".

The English team travelled to Australia the following winter (by ship of course - and it was summer in Australia) and their captain, the Honourable Ivo Bligh, referred to "the ashes" in a speech around the time of their first match. This reference was picked up by the ladies of the Clarke family's estate where the tourists stayed that Christmas.  After a friendly match against the men in their family they presented some ashes (of what it is not known) to the tourists who then took them with them on their travels and back to England.

Ivo Bligh returned to Australia later in 1883 to marry the Clarke's music teacher, Florence Murphy, one of the ladies who had presented the ashes. As Ivo was the second son of the Earl of Darnley (hence "the Hon."), and as his elder brother died before him, Ivo became the Earl of Darnley (usually shortened to "Lord Darnley") and Florence became Lady Darnley. They lived at Cobham Hall and kept the ashes there until the Earl died in 1927. His widow gave the ashes to the MCC in 1929.

The Earl's grandson, the then Lord Darnley, appeared on the radio in December 2002 to argue that the Ashes should not be returned to Australia as they were essentially the property of the Darnleys and only given to the MCC for safe-keeping. 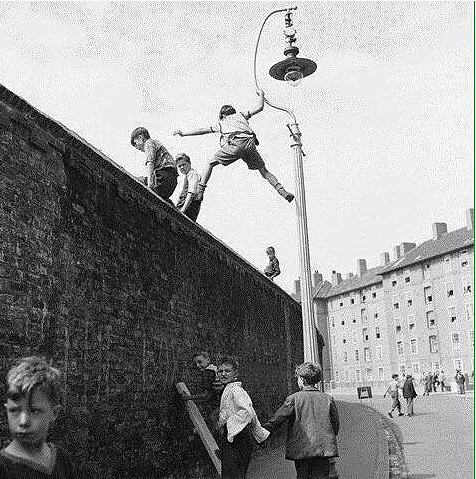 England won back the Ashes at the Oval in 2006, encouraged by rooftop fans - see left - as well as those who had paid for seats.

The rooftop spectators were not the first to find ways to watch the cricket without paying.