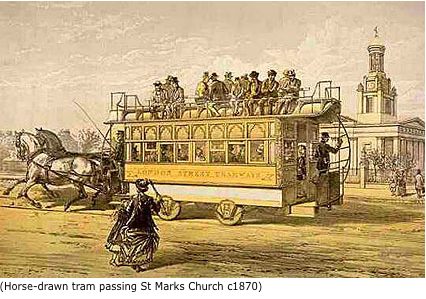 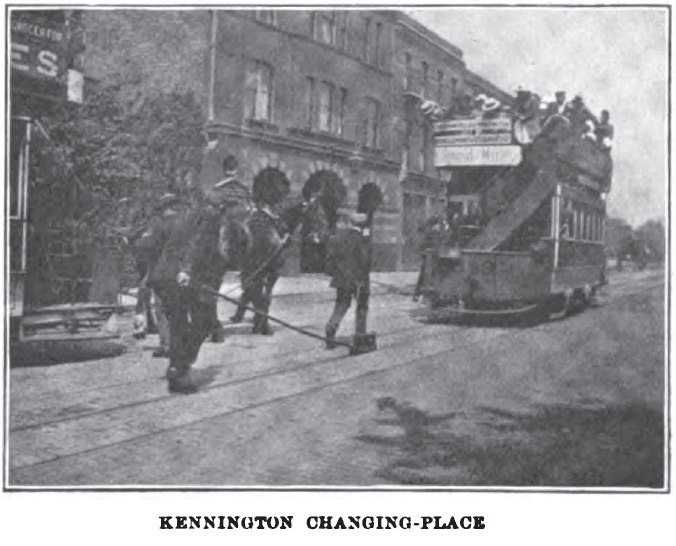 South Londoners are well used to hearing that their bus is going to ‘Streatham Hill, Telford Avenue’. Few know that this site was originally the terminus of the Brixton Cable Tramway which linked Kennington, Brixton and Streatham Hill. Brixton Hill had previously been found too steep for all but the lightest of horse-drawn trams

The cable tramway connected with three horse-drawn tramways at Kennington Gate – presumably near the Oval at the junction of Kennington Road and Kennington Park Road. The horse cars were initially uncoupled from their horses and coupled to a gripper car which drew them all up the hill to Streatham.   The Board of Trade objected to the gripper cars carrying passengers until after the line had been in operation for some time.  But the American inventor of the system was not impressed:-

‘MR. HIRAM S. MAXIM, the inventor, is contributing to the Engineering Magazine a series of articles on various differences in industrial conditions between England and the United States. He has been especially impressed by what he terms an ignorant prejudice in England against American products. This he illustrates with an amusing bit of personal experience:

"A short time ago an American cable line was established in Brixton, a suburb of London. Upon first visiting Brixton I failed completely to recognize the system, as each car was provided with a small and extremely ugly locomotive. Upon closer inspection, however, I found that the locomotive carried simply the clamping device. Upon asking the 'driver,' or the man at the clamp, the object of the apparatus, he said: 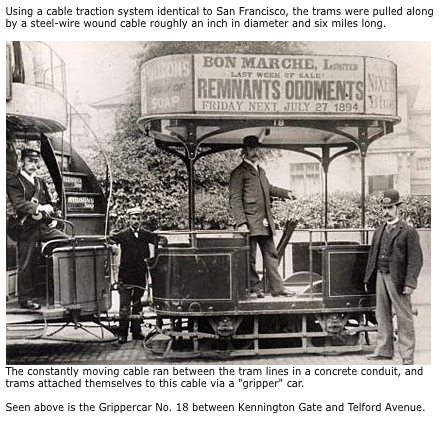 "' Oh, this is the locomotive. This draws the car.'

"'What is the object of the locomotive?'

"'But why not put the clamp on the car and dispense with the locomotive altogether?'

"After he had thought the matter over a short time, I asked again:

"'What is the use of the locomotive?'

"Now, if this system had been introduced into a country like Germany, France, or Spain the natives would have had sufficient respect and confidence in American engineers and systems to have put it up in the exact manner that it was imported; but as the English engineers were used to a locomotive and wished to make some change in the American model, they added the 'locomotive,' which certainly looks very awkward, and is, without question, superfluous."’

The cable system was driven by steam powered winding gear at Streatham Hill. Its maximum speed was 8mph (14kph).  There was a tram shed near the Oval – The building is now a church at 20 Brixton Road - photo opposite.

It is perhaps slightly odd that the tramway began as far north as Kennington, but this may have been to help the trams get up the sharp hill outside St Marks Church, further along  which the Effra River originally tumbled on its way to Bermondsey.

The Streatham Hill tram shed was eventually renamed Brixton Bus Garage, a name that caused much confusion. Lang Rabbie explains that ‘For years, people heading out of Brixton heading for Streatham Hill were confused by this, and stood at the bus stops by the tube while buses to Streatham Hill sailed past with misleading destination boards saying Brixton Garage.’  London Buses eventually relented around 2000 and renamed the bus stop (and terminating point for bus routes) as Telford Avenue.