London's development gathered pace in the 1600s - as so did Vauxhall's. The separate cities of Westminster and London both expanded and met at Temple Bar - although the City of London was devastated by the "Great Fire" of 1666. Meanwhile, south of the river, Southwark and then Lambeth became entertainment centres, including Shakespeare's Globe Theatre. Southwark's stews (bath-houses/brothels) had existed for centuries, for prostitutes were not tolerated in the City of London (apart from in the brothels of Cock Lane). Men therefore resorted to the Southwark stews, with little or no shame, as mediaeval marriage vows required only the fidelity of wives. Men could do as they pleased. Most of the stews were rented from the Bishop of Winchester and many of the Bishop's 'Geese' are buried in Cross Bones on Redcross Way, just behind Borough Tube Station.

In parallel, Lambeth's theatre, circus and music hall became increasingly well established over the years. The first and most prominent development was the opening of the Vauxhall Pleasure Gardens in 1661, which went on to reach the height of their popularity in the early 1800s, with 20,000 visiting on one night in 1826.

The area then became the home of the world's first modern circus. Cavalry officer Sergeant Major Philip Astley performed equestrian stunts in the Vauxhall Pleasure Gardens before setting up a riding school near Westminster Bridge. He found that dramatic stunts could be mounted using the centripetal force created by a horse cantering round inside a ring - and that the ideal diameter of the ring was - and still is - 13 metres. He initially used the stunts to publicise his riding school but they became so popular that the circus was established as an attraction in itself in 1772, and was then copied around the world. The circus was situated just south of Westminster Bridge, on land now occupied by St Thomas' Hospital. 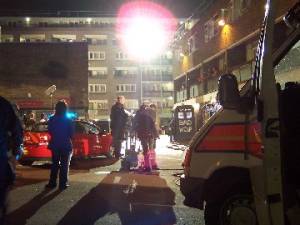 But probably best Kennington's best known theatrical product is Charlie Chaplin who grew up in the area and launched his career at what is now the Coronet Cinema at the Elephant and Castle. Another famous comedian, Max Wall, was born in Glenshaw Mansions on the corner of Brixton Road and Mowll Street. More recently, actor Pierce Brosnan started acting at the Ovalhouse Theatre, whilst the 2005 revival of the BBC's "Doctor Who" (featuring Christopher Eccleston and Billie Piper) was filmed on the Brandon estate, just east of Kennington Park:- The photo on the left shows the Tardis on the estate at night.

The area's liberal and theatre traditions live on together in the "Liberal & Radical" club in Kennington Road, which still houses a music hall, and in the White Bear Theatre Club on Kennington Road.

The 1600s also saw Vauxhall becoming the home of a number of industrial premises, including

The Nine Elms area eventually became even more solidly industrialised, and included the gasworks mentioned above (where there was a huge explosion in 1865); cement manufacturing (still there today); a large waterworks (which - because of pollution in the nearby Thames - had to have its water pumped in from West London); the famous Battersea Power Station; and huge railway manufacturing and repair facilities, sidings etc., including the original terminus of the railway that now runs through to Waterloo. There was also a good deal of working class housing in the area, and the voters of Battersea in 1892 elected John Burns to represent them in Parliament, one of the first three Independent Labour Party MPs, an early step along the road to the eclipse of the then powerful Liberal party. 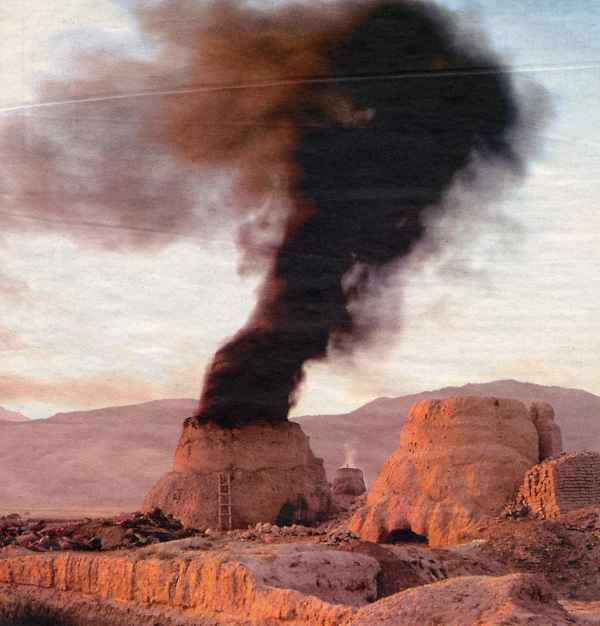 The picture to the left - of a modern day brick kiln in Afghanistan - graphically shows how much smoke was developed by primitive industries glass and pottery industries:- which was one of the reasons why they were banished to Vauxhall, the other side of the river and a good distance from the old City of London.

And Vauxhall represented only one element of the industrialisation of what is now South-West London. There is an interesting walk (The Wandle Trail) along the River Wandle which features the course of the Surrey Iron Railway (which has a good claim to be the first (horse-drawn) public railway in the World) and which passes the site of William Morris' factory in Colliers Wood. The Wandle river itself was heavily industrialised ("Britain's hardest working river") and used to have over 90 mills along its banks. These days, however, it flows though Morden Hall Park, one of the loveliest parks in London. 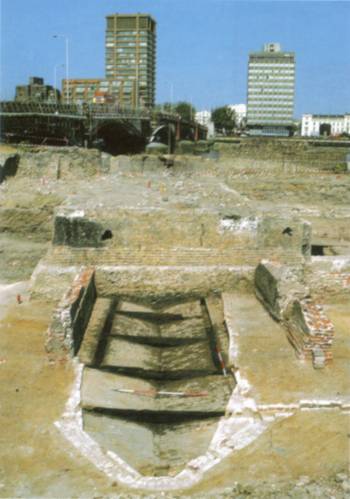 Burrough's Beefeater London Gin distillery next to Tesco on Montford Place is a relatively new addition to the area's industrial heritage. The Burroughs' distillery was originally in Chelsea and moved to Hutton Road, Lambeth (now Beaufoy Walk) in 1908, and then to its present premises in 1958. The phrase London Gin refers to the manufacturing method, not the place of manufacture. Indeed, Beefeater is now the only London Gin that is actually made in the city. The company sells 30 million bottles a year but employs only four distillers - and only they know correct proportions of nearly pure alcohol, water and nine botanicals - including juniper berries of course. Kennington's product is transported by 4 or 5 tankers a week to the Chivas bottling plant in Scotland, where it is diluted to its c.40% retail strength with relatively pure Scottish water. The ultimate owner of the business is now Pernod Ricard.

Another reason for the growth of manufacturing industries in Vauxhall was of course its access to the River Thames, the M2 motorway of its time. But the river was used by many others, including the fishmongers, the mercers and the clothworkers whose livery companies built a bargehouse in Vauxhall, next to John Baker's glasshouse. The picture on the right, with Vauxhall Bridge in the background, was taken during the excavation of the glassworks before the construction of what is now the MI6 building.

The Thames' shoreline in central London is nowadays mainly course gravel with occasional old ironwork etc. This is because the shore was originally mud and clay - so gravel (and much else) was commonly tipped on top so as to create a working surface. This is these days being eroded to reveal large stretches of mud and clay, plus occasional peat, showing how vegetation once grew where what is now near the middle of a deep river.

One souvenir of Vauxhall's nautical past was the old ship's cannon which used to act as a bollard at the corner of Vauxhall Walk and Black Prince Road:- see photo on right.

Then river was of course a barrier as well as a liquid highway. Indeed, there were no bridges across the Thames between London Bridge and Kingston (where the river is no longer tidal) until Fulham/Putney Bridge was completed in 1729. But Kennington began to develop as a major suburb after Westminster Bridge was the next Thames bridge to be completed in 1750. (It was replaced in 1862.) There was then a period during which Lambeth (the area by the river) aspired to become a middle class suburb, and attracted some prominent residents. In the longer term, however, (and unlike north of the river) middle class residential development south/east of the river took place well away from the river - see Lambeth High Street below.

The Thames remained heavily polluted well into the 1800s and caused two major cholera epidemics in Vauxhall in 1848/9 and 1854. But the latter epidemic enabled Dr John Snow (of Broad Street pump fame) to carry out his Grand Experiment which showed that cholera was definitely a water borne disease. Click here to read this fascinating story.

This is a photo of the Windmill Inn on Lambeth High Street in 1860: 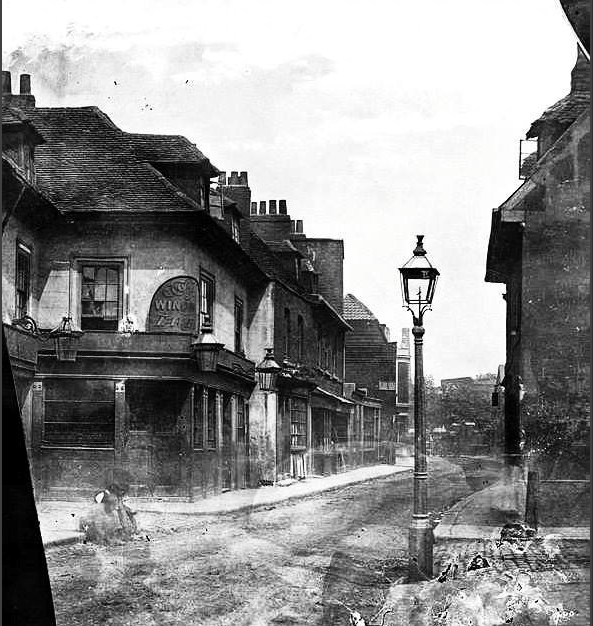 And here is a nice comparison of the area around Lambeth Bridge in 1866 and 2013.